With Latinos seriously underrepresented in U.S. clinical studies, "Research Ambassadors" go into the community to educate, dispel myths, and discuss the value of participation in clinical studies.

With Latinos seriously underrepresented in U.S. clinical studies, "Research Ambassadors" go into the community to educate, dispel myths, and discuss the value of participation in clinical studies.

At a basic level, evidence-based health care is driven by data generated in clinical research, but for decades that data has contained a notable bias: the vast majority of research participants have been White. As a result, health care providers treating nonwhite patients draw from a smaller base of knowledge based on information from other ethnic and racial groups, which contributes in part to poorer health outcomes for millions.

The lack of participation of minorities in research ultimately hurts minorities," according to the SC CTSI. Treatments and personalized medicine call for participation of people of all genders, ages, races and ethnicities and lack of it will prevent us from correcting disparities.

There are, of course, many reasons for the past and current underrepresentation of nonwhite participants in clinical and translational research, including distrust and fear of studies and institutions, and a lack of understanding about the need for research. While these are concerns shared by most everyone, they are often and justifiably felt with greater immediacy by people from nonwhite populations. The current political climate has increased fears and mistrust among our Latino communities, with many unwilling or fearful of sharing personal information.

The Community Engagement team at the SC CTSI, which explores various ways to achieve health equity across all populations and communities, has been studying ways to increase involvement of nonwhite participants in clinical research. Their Research Ambassador approach employs promotoras—community health workers who provide education and advocacy—to bring the facts of clinical research straight to the people, particularly those with Latino backgrounds.

In this pilot phase of the Research Ambassador program, the Community Engagement team is working with the Los Angeles area's Latino communities Their work is built upon a growing foundation of experience and success using the promotora model to provide education and other help about widespread, serious health conditions such as diabetes and heart disease. 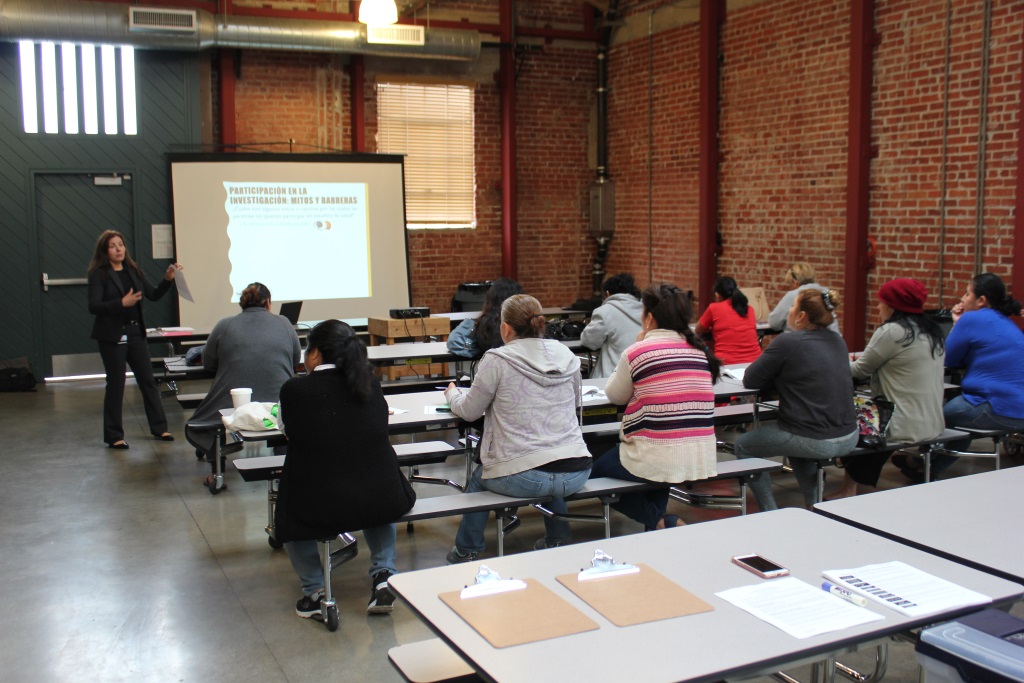 Promotoras Alma Garcia and Sara Calderon have been the program's initial Research Ambassadors. Together, they work to organize workshops in community settings that focus on providing basic information about clinical research, including what it is, participants’ rights in a study and the potential benefits of participation.  After several months in the field they say their success largely depends on their ability to find and partner effectively with the right community members, usually people who work in trusted institutions such as churches, schools, and community centers, where the program's outreach meetings typically take place.

"Finding the right person is the first step," said Calderon. "We'll explain the program to them, and once they understand what's needed, they'll become the recruiters. That opens the door."

The results of the Research Ambassador program are being formally evaluated by the SC CTSI community engagement team. So far the ambassadors have met with approximately 300 people, and interest has often been stronger than expected.

"People in the community are willing to participate in clinical research, but the information has to come to them," said Mayra Rubio-Diaz, of the SC CTSI Community Engagement team. "If it's brought to them, they'll participate."

According to Calderon and Garcia, among the most powerful educational tools the Research Ambassadors use when they meet with groups is a video that explains the process of clinical studies, including the safeguards to protect the participants' physical safety and privacy.

But perhaps the most important point made in the video is about the larger benefits of clinical study: "The video shows how the medical advances we have now would not be possible without participation by people who did their part," Garcia said. "That's something that opens their eyes."