Note: The following research by Dr. Christina Dieli-Conwright at USC's Division of Biokinesiology and Physical Therapy was supported by the SC CTSI's Biostatistics, Study Design, und Epidemiology (BERD) core group. The tissue collection and analyses were also funded by the SC CTSI. 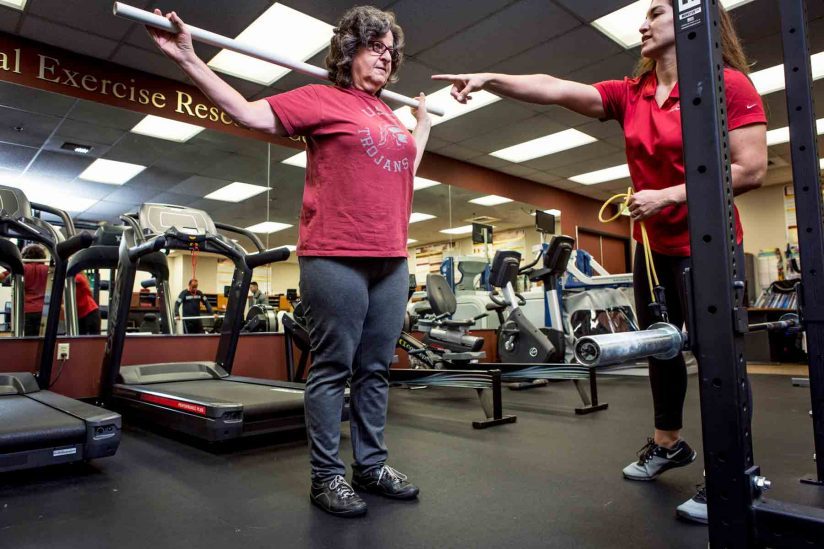 When Carla Sanchez started working out as part of a study on exercise’s impact on women who survived breast cancer, she was surprised at how vigorous it was.

“I’m 65, so I’m not exactly a young kid,” Sanchez said. “When I was younger, women didn’t necessarily lift weights.”

Though she was an avid bowler before entering breast cancer treatment, Sanchez said the weights and stationary bike in the gym were all new to her.

Sanchez was part of a pioneering study from Christina Dieli-Conwright, an assistant professor of research at the USC Division of Biokinesiology and Physical Therapy.

“Breast cancer has a relatively high survival rate, and many people don’t realize that the number one cause of death for survivors is actually heart disease,” she said.

Dieli-Conwright added that the majority of women who go through four months of chemotherapy develop metabolic syndrome — a cluster of health conditions that includes high blood pressure, excessive body fat and high cholesterol.

To look at how exercise might impact the health of breast cancer survivors, the junior researcher developed a study with funding from the National Cancer Institute, tapping into the diverse population around USC and recruiting women who were just finishing treatment for breast cancer.

The women worked out, supervised, for 16 weeks with a program based on guidelines created by the American Cancer Society and the American College of Sports Medicine. This program included at least 150 minutes of moderate intensity activity spread throughout the week and two days of resistance training with weights.

As a result of the exercise intervention, health conditions related to metabolic syndrome improved and women lost weight from fat and gained muscle — compared to a control group of sedentary women.

Dieli-Conwright presented these findings in the Journal of Clinical Oncology, a leading resource for cancer researchers.

The study is the largest to date in cancer survivors to show such a positive impact of exercise on metabolic syndrome and in such a diverse sample of breast cancer survivors.

At the cellular level
From the same study, Dieli-Conwright took blood samples and fat biopsies from 20 obese patients to determine how the exercise intervention affected systemic and cellular inflammation.

Inflammation is particularly important because it’s believed to be one path through which obesity causes cancer to get worse over time and even recur, said Dieli-Conwright, who published her findings in the journal Breast Cancer Research and Treatment. The findings show that exercise intervention improved systemic inflammation and reduced inflammation in the fat cells.

She’s quick to point out that this study doesn’t show that exercise prevents cancer recurrence — but the results are still encouraging.

“Exercise is a form of medicine and this study can just add to that knowledge,” Dieli-Conwright said.

Exercise is a part of getting better
Scientists still don’t know exactly why women gain weight during breast cancer treatment.

“We don’t know if it’s the chemotherapy that changes some of their basic biology to cause them to gain wait, or changes in lifestyle because they’re fatigued and sedentary from treatment,” Dieli-Conwright explained.

That’s what happened to Joyce Chen, another participant in Dieli-Conwright’s study. When she first heard about the research, she was just finishing radiation after surgery for breast cancer.

“I was looking for anything to get back in to the gym. Exercise was one thing I didn’t get to do during treatment,” Chen said. “Your body is all out of whack after surgery.”

Chen also appreciated having the emotional support of trained exercise specialists and other survivors around her.

“It’s good to be with people who have been through it, too,” she said. “It’s a reminder that exercise is part of getting better.”

Dieli-Conwright hopes to follow up on these studies with a larger trial of more than 300 women. She also would like to test different exercise paradigms to derive newer types of exercise intervention. If women don’t prefer the 150-minute-per week of aerobic exercise, they could try circuit- or interval-type programs, Dieli-Conwright said.

“So we can prescribe exercise on a more individualized basis.”

Original article can be found here.