Analysis of data from U.S. trauma centers indicates that children are at greater risk of mortality in the first hours after serious injury, suggesting a new focus for training of emergency department personnel.

Pediatric care professionals have all read some version of the following sentence at the start of countless research publications: "Injury is the most common cause of mortality in children." Approximately 12,000 babies and youths die each year from injuries. 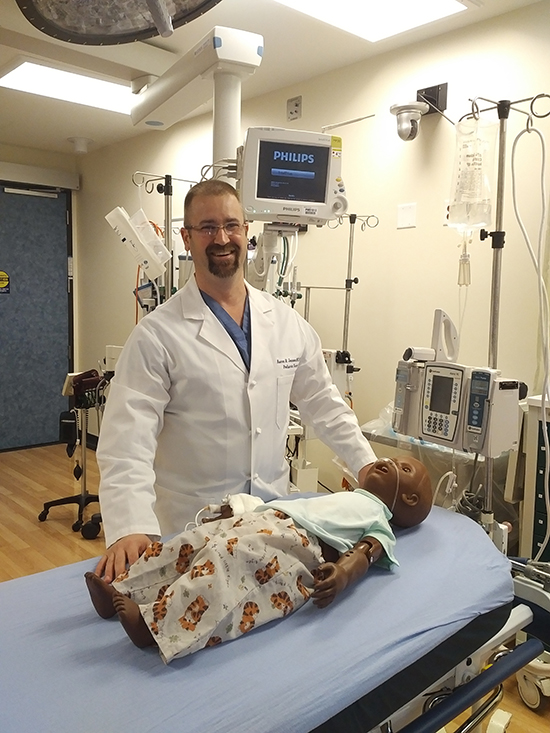 Many studies of adults with traumatic injury have shown a trimodal temporal distribution of mortality: some die immediately after injury, with a second peak in mortality a few hours later, and a third spike up to a week later. Understanding this trimodal distribution has helped emergency specialists refine training and care protocols, resulting in lives saved.

But the temporal distribution of mortality in pediatric emergencies has not been well understood, explained pediatric trauma surgeon Aaron R. Jensen, MD, Assistant Professor of Clinical Surgery in Pediatrics, Keck School of Medicine of USC, and an attending physician at Children's Hospital Los Angeles.

"Children tend to be more resilient than adults, but it had never really been studied when children actually die after injuries," said Jensen, who is extending his training as a clinical investigator in the SC CTSI's Mentored Career Development in Clinical and Translational Science Program (formerly known as the KL2 program.)

Finding answers in big data.
Fortunately, said Jensen, the answer to that and many other questions about emergency care can likely be found in a huge trove of data called the American College of Surgeons National Trauma Data Bank Research Data Set. Emergency centers around the country contribute information about tens of thousands of emergency cases to the data bank, making it the largest source of raw data on trauma treatment and outcomes — and a key tool for improvement in care.

As part of his SC CTSI mentored training, and with assistance of a biostatistician from the SC CTSI, and other co-investigators, Jensen designed a retrospective cohort study to mine the National Trauma Data Bank, analyzing thousands of pediatric emergency cases. Perhaps unexpectedly, the study found that children actually showed a higher incidence of early mortality compared to adults.

Working with the data bank takes specialized skills, however. "This data set is large and complex. There are a number of barriers to using it, making it hard to use if you don't have don't have advanced statistics training," said Jensen. "I could not have done this study without the help of the SC CTSI's biostatistics core. I'm a surgeon, and while I've had some training in statistics, it's not my area of expertise." Caron Park, of the SC CTSI's biostatistics core, conducted the data analysis.

SC CTSI statistics team member Christianne Lane, Ph.D., is coauthor of the retrospective study, with Jensen and several others. The coauthors came from Keck School of Medicine, CHLA, the SC CTSI, and the Children's National Medical Center. The study was recently accepted for publication in the Journal of Pediatric Surgery, as "Timing of mortality in pediatric trauma patients: A National Trauma Data Bank analysis."

Strengthening the case for simulation training.
The study suggests that greater resources in emergency medicine research should seek to address the earliest phases of care for pediatric trauma. "Given the propensity for early death, more efforts in trauma prevention, prehospital systems development, and investigation targeted at developing new strategies to improve early resuscitation may play an important role in the reduction of pediatric trauma deaths," the authors wrote.

"Our results really add credibility to why we're doing simulation training," said Jensen. "There are many phases of care we can focus research efforts on, but this shows that the area to improve is the initial phase of care."